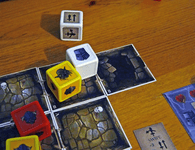 Dungeon in a Tin (2011)
Subdomain: Thematic Games
Player Count: 1 - 4
Playing Time: 20 minutes
View Game Meta Data
View Game Ratings
Visit the BGG Page
Game Description (click to show/hide)
Dungeon in a Tin is a solo or cooperative dungeon-hack. Players descend into a dungeon randomly laid-out from a stack of tiles, fighting through the orc and goblin hordes to rescue the kidnapped maiden and collect treasure and glory.

Each player takes turns to move through the dungeon one tile at a time, laying new tiles as unexplored areas are entered; every time a player enters a room, special monster dice are rolled to determine the enemies faced and the potential loot to be found. When a monster attacks, a die is rolled to determine the style of their attack; the player then chooses a card from his hand to counter with, each card being strong against some kinds of attack and weak against others.

This Print-and-Play game was an entry in the 'One Full-sheet Label' design contest here on BGG, and as such the printed components fit entirely on a single label sheet. A small number of other tokens and blank dice will also be required. Additionally, as the name hints, once constructed on cardstock it is possible to fit the game inside an Altoids tin or similar.
Entries over Time Chart (click to show/hide)
Share This Page on BGG
Paste the following BGG Formatted Link into any post (click box to select all, then copy to clipboard).