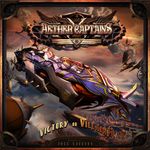 One player commands the mighty naval zeppelins of the Grand Compact: Dauntless and Dominion. As Commander, you have been tasked by the Emperor to defend the Grand Compact and Arkady from the merciless sky pirates. With your staunch crew of steam welders, engineers, navigators and gunners, you fly with honor to confront the pirates threatening Arkady.

The remaining players command waves of attacking sky pirates, each with their own unique objectives which may pit them against any player when it results in the greatest profit for themselves. Infamous and feared, you have risen through the cutthroat cadres to become a War Captain. You swear to never rest until you control the skies and the Grand Compact falls!