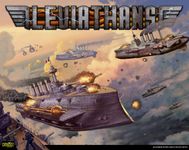 Leviathans (2012)
Subdomain: Wargames
Player Count: 2 - 8
Playing Time: 90 minutes
View Game Meta Data
View Game Ratings
Visit the BGG Page
Game Description (click to show/hide)
In 1878 the Polish genius Rychnowski isolated an electrical fluid with remarkable lifting capabilities – a single, pivotal event that would change the world. The smartest military minds of the coming generation – Zeppelin, Jellico, Fisher and others – diverted their attention to the glorious new technological revolution and sea-going battleships were abandoned around the world. In their place, armored giants took to the skies.

In 1906, Great Britain launched the HMS Leviathan, the first of the "super air ships", sparking an arms race around the world. By 1910 the most powerful nations boasted large High Fleets, and the start of small skirmishes left the world uneasy... Welcome to Leviathans!

Leviathans is a game published by Catalyst Game Labs that simulates combat between warships that have taken to the air in an alternate history 1910. The king leviathans, the battleships, are the largest vessels. Maneuvering in support are the smaller ships of light cruisers, destroyers, and others ships. Will you captain your fleet for king and country, expanding your nation's power and becoming legend? Or will you fall from the sky, forgotten?

You will determine the outcome!
Entries over Time Chart (click to show/hide)
Share This Page on BGG
Paste the following BGG Formatted Link into any post (click box to select all, then copy to clipboard).