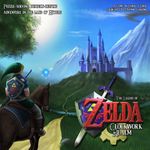 The dark times have returned.

The evil Prince of Darkness, Ganondorf, came once again to Hyrule to attempt to wrest the golden Triforce from the Sacred Realm. His first incursion was thwarted by the Sages, but in the titanic battle that ensued the Triforce was shattered; without its binding power to hold the the Kingdom of Hyrule together, the world itself became fragmented and disjointed, with the shadows of many worlds extending through the myriad dimensions of time and space. The shards of the Triforce are scattered among these, and a hero must rise again to search for and rebuild the sacred symbol of power, courage and wisdom.

However, this time, the hero is many…

The Legend of Zelda: Clockwork Realm is a cooperative game for 2-4 players, where each player will guide the various shadows of the hero, Link, in his journeys across Hyrule and into the dungeons scattered across the lands in his quest to reconstruct the sacred Triforce.

Each game of The Legend of Zelda: Clockwork Realm takes place over four consecutive levels, with the first level being the easiest and each increasing in difficulty as the game goes on. Each level is comprised of a dungeon that the heroes will explore in an attempt to find the dungeon's boss. The heroes must then defeat the boss in order to gain more Triforce Shards.

The game employs a form of deck-building to allow the players to level up their heroes. Each deck starts with just some basic skill cards representing a hero's Power, Courage and Wisdom. The heroes can add items and treasures to these decks to power up their abilities throughout the game. The players will then play these cards to perform actions during the different phases of the game.

At the end of Level 4, the heroes will face the all-powerful Ganon in a final showdown to determine whether they save Hyrule and win the game, or whether Hyrule will be plunged into an era of darkness under the rule of a new dark lord...
Entries over Time Chart (click to show/hide)
Share This Page on BGG
Paste the following BGG Formatted Link into any post (click box to select all, then copy to clipboard).