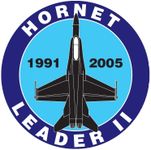 Hornet Leader II is based on the original award-winning design published by GMT Games back in 1991.

Like the original game, Hornet Leader II is designed from the ground up as a solitaire game.

The game places you in command of the pilots and aircraft of a modern day squadron of U.S. Navy F/A-18 Hornet Strike fighters.

When you play the game, you will plan and carry-out missions in one of three built-in campaign settings: Libya, North Korea, or Iraq. Each campaign takes place in a different era, so your weapon options change with each campaign.

A major part of the game is mission planning. You get to decide how your Hornets are to be armed, and which pilots are best for the mission based on their Air-to-Air and Air-to-Ground skills.

Missions are quickly resolved with the priority placed on speed and realism. Hornet Leader II has retained all the key decision-making aspects of the original game, while greatly streamlining the game mechanics.

While performing each mission, you get to decide how your pilots engage the enemy Bandits, SAMs, and AAA Sites. This makes for some tough choices, the more suppression munitions, you haul to the target, the safer your pilots will be, but the less likely you are to destroy the target.

Other Leader series games by Dan Verssen
Entries over Time Chart (click to show/hide)
Share This Page on BGG
Paste the following BGG Formatted Link into any post (click box to select all, then copy to clipboard).