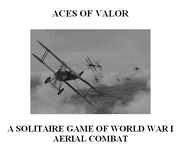 Aces of Valor: Aerial Combat during WWI (2014)
Subdomain: N/A
Player Count: 1 - 1
Playing Time: 30 minutes
View Game Meta Data
View Game Ratings
Visit the BGG Page
Game Description (click to show/hide)
ACES OF VALOR is a solitaire Game where the Player assumes the role of a Squadron Commander in charge of 10 aircraft on the Western Front during World War I.

Your Goal is to manage your Aircraft in order to Complete a Campaign, consisting of a series of Missions, and score enough Victory Points (VP) to assist the war efforts.

Campaigns may be Short (8 Missions), Moderate (12 Missions), or Long (16 Missions). The Player determines the length of Campaign to be played.

VPs are earned by destroying enemy aircraft and ground targets. You lose VPs by losing aircraft and failing to complete missions. The Player moves his/her Squadron Flight Counter on the Battlefield Map, however, combat is resolved easily off-map using an Inititiative Track. If you enjoy movies like "The Blue Max" or "Aces High", this game is for you.

Most Games usually take 2-4 Hours to print out and assemble, depending on the number of counters, Cards and Mapsheets.

Aces of Valor can be found at http://www.berserkergames.net
Entries over Time Chart (click to show/hide)
Share This Page on BGG
Paste the following BGG Formatted Link into any post (click box to select all, then copy to clipboard).

Game Entries by Month
May 2020
[BGG]
SteveB
[PNPCRAFT]
Entries for the month: 1