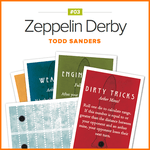 In this fast-playing racing game for two intrepid Zeppelin pilots, the players race their airships by rolling dice and playing cards — including a few dirty tricks! Who has the moxie to cross the finish line first?

Zeppelin Derby has been specially created for Good Little Games by designer Todd Sanders, based on his original game of the same name that formed part of his Aether Captains: Triad and Aether Captains: Triad 2 game packs.
Entries over Time Chart (click to show/hide)
Share This Page on BGG
Paste the following BGG Formatted Link into any post (click box to select all, then copy to clipboard).

Game Entries by Month
May 2015
[BGG]
orabbi
[PNPCRAFT]
Entries for the month: 1