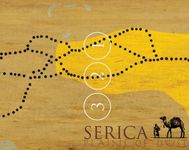 Serica: Plains of Dust (2011)
Subdomain: N/A
Player Count: 2 - 2
Playing Time: 30 minutes
View Game Meta Data
View Game Ratings
Visit the BGG Page
Game Description (click to show/hide)
Serica is a game for two players and is about the trade between the ancient empires of Rome and the Han Dynasty of China (around 200 AD). Each player will draft cards into a deck, use those cards to send Trade Caravans across Asia, and build opportunities in trade, military and the court. Players must work together to trade goods while competing to build cards and gain victory points.

Win: Players gain Victory Points (VP) by sending trade caravans across the Silk Road Trade Map and buying/building cards on their side of the Map. The game ends when one player builds 10 cards. At that point the player with the most victory points is the winner.

Setup: Decide who will be the Han Dynasty and the Roman Empire and place the Silk Road Trade Map between both players. This map allows players to track their Trade Caravans across the Silk Road through Asia. It also designates areas for players to build fields of cards in the game to gain Victory Points.

Play: Each round of the game consists of 4 phases. Each player will complete all phases in turn. Player 1 going first, followed by Player 2.(Note: Card abilities in a Player’s Empire may be used at any time during phases 1-3, and all card abilities are cumulative.)

• Phase 1: Production During Phase 1, the active player has 8 Production Points (PP) to spend. Production points are used to produce trade goods and hire artisans, which are in turn, used to buy cards, build cards and send Trade Caravans across the Silk Road for VP.

• Phase 2: Buy/Build/Defend The active player may now do any of the following 3 actions. Actions must, however, be in the following order:

B. Build: Build one or more cards from your player empire by discarding the correct number of artisans equal to the build cost as listed on the card. Place this card in one of the 4 fields located to the left or right of the Silk Road Trade Map as designated by the player’s color (Note: a player may only build cards to their side of the Trade Map). Built cards gain victory points for the player. Add these victory points to the player’s total on the Victory Point Track. Built cards no longer have their card abilities available to the player; they are now worth only victory points and, in some cases, defensive strength.

Players may not switch cards in any field once built.

Cards in fields do not have to match in name, type or color.

Cards must be adjacent for additional stacked victory points.

• Phase 3: Trade The active player may now do only one of the following:

A player may move all of their Trade Caravan pawns one space towards the opposing player. (Note: Each Trader card in your Player Empire allows Trade Caravans to move one additional space during this phase). Any Enemy abilities are now applied for any Enemy cards in the Crossroads. These may result in the loss of Trade Goods or entire Trade Caravans. Trade Goods have the following values when determining which to lose: Gold and Silk (3), Wine and Porcelain (2), Glassware and Spices (1).If a player must lose an entire Trade Caravan, they may choose which to remove.

End Game: Once a player has built 10 cards to their respective field the game ends immediately. The player with the most victory points is the winner.
Entries over Time Chart (click to show/hide)
Share This Page on BGG
Paste the following BGG Formatted Link into any post (click box to select all, then copy to clipboard).