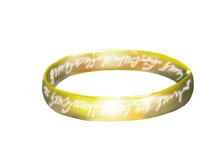 In Lord of the Rings: the adventure deck game, the player is Frodo, whose goal is to reach Mt.Doom, drop the One Ring into the volcano's lava, and save Middle Earth.He has to hurry, as Sauron is gaining power, so the journey cannot last more than 25 days.In his journey, Frodo will encounter friends who help him (from Aragorn to Legolas) but he'll also encounter enemies (like Trolls and the Nazgul) that threaten Frodo and make his mission harder.

From the rules:"Consider the card as a crossroad: therefore you are given choices on where to travel (up, left and/or right).The Directions show numbers (which range from 1 to 5) and show how many cards need to be drawn in order to proceed with the quest.

B. Each card shows an aggression number (ranging from 0 to 3) which represents the attacks you have received while travelling.Sum the aggression numbers of each card you draw to get an Attack value which represents the amount of wounds you have sustained this turn.At any time, if the total attack value is higher than Frodo's wounds, the player immediately loses the game.

This means that the Attack value will be the sum of all aggression numbers of cards drawn this turn.

Example: if the player chooses directions with a high destination number, which makes him move faster, he will finish the mission within the preset time of 25 days/turns, but will also increase the chances of getting damaged and killed.

While drawing or before drawing (depending on the item), the player will have the chance to use one item he is equipped with.The player can use only one item per turn.

C. Card Effects can be good or bad, depending on the card.A player resolves the card effects ONLY of the last drawn card of the turn. Unless otherwise stated, the ONLY thing the player should take into account while drawing the cards is the aggression number.

Example: if the player chooses a direction with a destination number 3, he draws (one at a time) 3 cards, adding the Aggression Numbers of all 3 cards and resolving ONLY the effects of the 3rd card."

Each turn, the player will have many choices to make, from deciding if he wants to rest (and recover his wounds), to which direction to go; from using potions or other items (like the Ring), to going looking for Aragorn to help him against the Witch King.

Main game mechanic: push your luck.
Entries over Time Chart (click to show/hide)
Share This Page on BGG
Paste the following BGG Formatted Link into any post (click box to select all, then copy to clipboard).