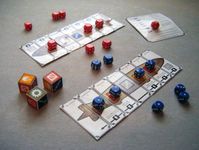 Aether Captains: Dread Supremacy (2011)
Subdomain: N/A
Player Count: 2 - 4
Playing Time: 20 minutes
View Game Meta Data
View Game Ratings
Visit the BGG Page
Game Description (click to show/hide)
Air Pirates have gathered at the mysterious Black Canyon to decide who shall lead them next. It is trial by combat! Build the strongest ship, stock it with ammunition, a fearless crew, and a fast engine. Then engage in a do or die dogfight to see who will have supremacy over the Federation of Air Pirates.

An Aether Captains Pirate Skirmish Game for 2 to 4 players

There are 2 phases: Build and Battle

Players take turns throwing the 3 ship building dice trying to make combinations of 2 and 3 colors. You are allowed up to 2 rolls for each throw and may re-roll 0, 1, 2, or 3 dice, as you choose, on your second roll. Each player will make 10 throws to build and stock their ships. Make your throw and pass the dice to the next player until everyone has had their 10 throws.

Different color dice combinations will allow you to activate a section of your ship (you only activate a ship section once) and then stock it with resources for the battle phase. Each activated ship section is also worth one damage rating point towards your total ship so it is advised that during the build phase to try and activate as many sections of your ship as possible. The black die icon counts as a wildcard and can be applied to any ship section or resource.

Rules include a players aid chart for resource combination.

Once everyone has built their ships it is time to battle in a set of skirmishes between players. Each player should roll the 1d12 once at the start of the battle. Reroll any ties. Whoever rolls highest has initiative to begin the battle skirmishes and goes first.

This person is the Attacker. They must pick one person to attack who will be the Defender. Both then roll their 3d6 battle dice simultaneously, hiding one and revealing the other two.

If your damage rating marker ever is moved to the Tail Section, your ship has been disabled and you are out of the battle.

Play until one person is victorious.
Entries over Time Chart (click to show/hide)
Share This Page on BGG
Paste the following BGG Formatted Link into any post (click box to select all, then copy to clipboard).