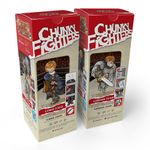 In addition to the standard attack, players can choose to change weapons, perform first aid, disarm an opponent, or make called shots for increased damage. Be the last fighter standing to win the game!
Entries over Time Chart (click to show/hide)
Share This Page on BGG
Paste the following BGG Formatted Link into any post (click box to select all, then copy to clipboard).